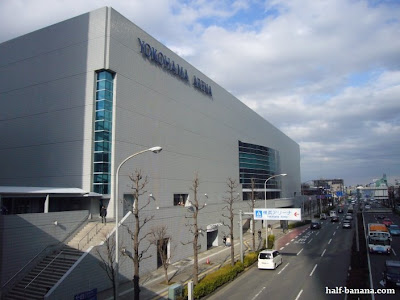 “Each of the Five Points is a finger,” said Bill “The Butcher” Cutting in the film Gangs of New York. “When I close my hand it becomes a fist. And, if I wish, I can turn it against you.”

Sixteen of DREAM’s mixed martial artists will enter the Yokohama Arena in Yokohama, Japan on Oct. 6 for DREAM 11, make fists, and turn them against each other. Here are five points to watch for on Tuesday night.

Japanese grappling wizard Shinya Aoki was the first person in MMA to tap out an opponent with a gogoplata at PRIDE Shockwave on New Year’s Eve 2006 and Joachim Hansen was the unfortunate soul doing the tapping. Two years later Hansen crossed paths with Aoki again in the finals of DREAM’s lightweight grand prix. Aoki carried a 12-fight win streak into the bout and Hansen was actually an injury alternate for Philly phenom Eddie Alvarez, the man who beat Hansen in the quarterfinals. Hansen rose to the occasion, though, and after a grounded punch onslaught by “Hellboy,” the “Tobikan Judan” had to be carried out of the ring and Hansen became DREAM’s inaugural lightweight champion.

Each fighter’s win over the other had a transformative effect on their careers. Aoki’s masterful submission put him on the MMA map, while Hansen’s vicious technical knockout provided the Norwegian fighter with his first signature win since defeating Takanori Gomi in 2003. Aoki has posted a 4-1 record, his only loss a welterweight bout versus Hayato “Mach” Sakurai. Taking Hansen’s title would fulfill Aoki’s championship grooming in Japan, where he’s fallen short in two tournaments designed to make him a star.

Aoki can’t afford to test the stand-up waters with Hansen and on the ground, his ability to take punishment is the opposite of Antonio Rodrigo Nogueira’s. As long as Hansen avoids rubber guard traps and isn’t too rusty after a 15-month layoff, he should emerge victorious.

Joe Warren has never competed in MMA outside of DREAM’s featherweight tournament, besting former WEC champion Chase Beebe and formerly pound-for-pound ranked Norifumi “Kid” Yamamoto in the process. The gritty Team Quest fighter faces another stern test in Bibiano Fernandes, a jiu-jitsu stylist who has come into the sport in a similar trial-by-fire fashion. The Brazilian, however, has not been able to rise above like the American.

If Warren can sprawl and brawl, a ticket to the finals is in his pocket. Fernandes has to be aggressive and creative, forcing scrambles. The more chaos, the greater the chance he can catch Warren making a rookie mistake.

The opposite end of the tournament bracket pits Hiroyuki Takaya against Hideo Tokoro. Tokoro’s inconsistency doesn’t serve him well against a single-minded fighter like the “Streetfight Bancho.” Takaya comes to strike his opponents faces off. As long as he’s patient with his striking, a chance at Warren-Fernandes is likely.

Assuming the tournament sees each favorite head into the next round, Warren likely exploits Takaya’s wrestling weakness with the same iron-chinned performance he had against Yamamoto. A tournament win for Warren would mark one of the best entrances into the sport’s modern era and put other lower weight fighters on notice.

Daiki Hata takes on Kazuyuki Miyata in a reserve bout and “DJ Taiki” should beat Miyata in every aspect.

Japan’s consummate underdog, “Minowaman” must reach deep into his bag of tricks to avoid Hong Man Choi’s physical power. Rameau Theirry Sokoudjou can’t reply on his strength against Bob “The Beast” Sapp, so technical and tenacious striking are needed on his way to a much needed tournament win. Perhaps more important than defeating MMA anomalies like Sapp, Choi and Minowa, a bout between Sokoudjou and is original DREAM.11 opponent and Strikeforce light heavyweight champion and Gegard Mousasi hangs in the balance.

Tatsuya Kawajiri is in a no-win situation, facing wrestler Melchor Manibusan. One of the world’s best lightweights, Kawaijiri should dispose of his one-dimensional opponent with ease, but if some gods shine down on Manibusan, Kawajiri’s stock will take a Keith Jardine-Houston Alexander-like plunge. Expect “Crusher” to earn a KO in a bout that represents the quizzical side of Japanese matchmaking.

MMA legend Kazushi Sakuraba was added to the event just three days before it takes place. Years past his prime and having suffered through some of the sport’s worst beatings, every time Sakuraba fights feelings of nostalgia accompanied by fears that he’ll suffer lasting neurological damage. Against MMA neophyte and former professional boxer, Rubin Williams, Sakuraba should find his famed single leg takedown and work for a submission win. Every fight starts standing, so Williams has a chance, but it’s more likely to be Sakuraba’s victorious swan song.