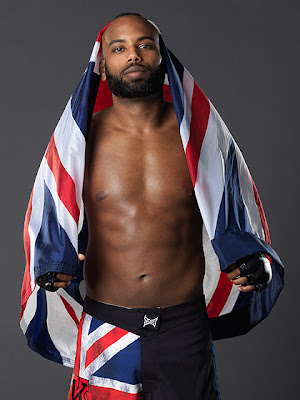 Dean Amasinger will return to the cage at Ultimate Challenge Dynamite in London on October 24. Fight fans might remember the “The Renegade” from The Ultimate Fighter 9, on which he appeared as a member of Team UK.

Despite Team UK’s success, the show proved hugely disappointing for Amasinger. Losing to DaMarques Johnson via a triangle and picking up various injuries led to a long road of physical and mental recovery. Training out of Team Rough House in preparation for his fight against Scott Jansen, he said, “It’s the first time I’ve been injury free for the whole of a fight camp.” He added, “It’s been a long time since I fought but I’ve used the time well, I’ve healed up old injuries, worked on my weaknesses and built on my strengths.”

Refusing to let the disappointment of the Ultimate Fighter series affect him, he said, “I was really disappointed, I didn’t perform and the situation got to me. I don’t mind losing if I give it my all and I was bested by a better man, but I felt I threw it away by not sticking to the game plan and letting other things break my focus. It didn’t turn out as planned but it was a great experience and I’m glad I did it.”

Amasinger’s interest in mixed martial arts began from an early age. “My uncle teaches kickboxing so I started when I was very young and from an early age I had an interest in Martial Arts,” he said. “Through my teens though I played rugby at a high level, so the Martial Arts took a back seat. As part of my rugby training I did some wrestling and judo and I took to it really well. After a pretty serious injury I stopped playing rugby and began training MMA with the guys a Rough House and it went from there.”

A university graduate, “The Renegade” has used his research skills to study his opponent, Scott Jansen. “He’s tough; watching videos on him it’s obvious that he’s tough and he’s not afraid of a fight. His strength is his stand up and that’s where he’s going to keep the fight. He comes out swinging straight of the bat and if that doesn’t work for him he doesn’t seem to have a plan B,” he said.

Amasinger on the other hand, does have a backup plan. After watching various UK fighters like Paul Daley, Dan Hardy, and Ross Pearson excel on the world stage, “The Renegade” is hoping to join the growing list of UK fighters in the Ultimate Fighting Championship.

“Ultimately I’d like to be back in the UFC because that’s where the best fighters in the world are and therefore the best place to test yourself. I’ve always wanted to fight in Japan though so during this time out of the UFC, my ‘DREAM’ might come true.”

It's All (Lyman) Good: Bellator Champ Waits to Fight