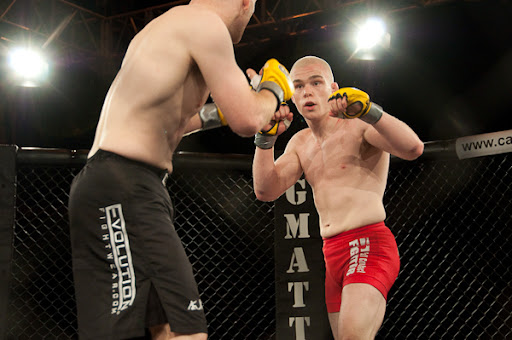 (Maclean in action against Thomas at Cage Warriors. Photo by Dan Holmes)

Interview by Laura Brown of MMAIreland.org.

Ali Maclean will step back into the cage again this weekend in another UK showdown, this time at OMMAC.
After a disappointing loss at Cage Warriors, the Irish fighter’s confidence does not seem to be dented at all.
Instead “Insane” Maclean is confident of victory.

Ali, coming off a tough loss against a high calibre fighter like Daniel Thomas, how are you feeling before your fight at OMMAC this weekend?

I was back in the gym the Monday after my last fight. It was disappointing but I did think that if he was going to win, that is how he would do it. It was down to experience. I’m ready to move on to the next thing – which is this weekend’s fight.

Who are you fighting and what can you tell us about him?

Mike Wilkinson. He is a scrappy wrestler – he will probably try to submit me but I think I have it covered. He is good at scrambling though so it should still be a good test of my skill.

Have you focused on anything in particular for this opponent?

Again just been working on my all round game; sharp strikes, mixing things up a bit and of course wrestling.

How do you see the fight going?

I see him going for an early takedown but I think I will prevent it. I will do him some damage while we’re standing and then I’m going for a ground and pound stoppage.

I assume you have trained for this fight in the same place as last time (Team Kaobon). What is it like training with such high quality guys like Terry Etim, Paul Taylor etc on a daily basis?

Yes. It is top class. They are the best team in the UK. When I started sparring I was sparring with the likes of Chris Stringer and getting my bag kicked in now I can stand up with them! I have moved on and get my bag kicked in elsewhere now. It is a good thing though, I’m stepping up!

Would you ever consider making a permanent move to England to train?

I plan to make moves in September to the UK and bounce back and forth to Scotland too.

What plans do you have after this fight? Another fight in the UK? Or will you be heading back to Ireland for a while?

I’m heading back to Belfast where I will take two months off. I don’t have plans to fight again this year but if something came up I could perhaps be convinced…

The promising young talent will be in action for the last time before a short hiatus this weekend, so make sure you are on the look out for Maclean vs. Wilkinson at OMMAC 5: Showdown, headlined by Paul Cahoon vs. John Phillips, this weekend.