Kenneth Rosfort: "The Knockout Will Come Sooner Or Later." 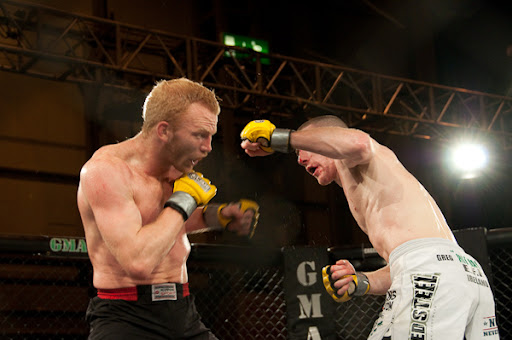 (Rosfort and Loughran swing with intent. Photo by Dan Holmes)

The European lightweight scene is bustling at the moment with hordes of talented fighters breaking through and proving themselves on the international stage. Amongst these, Kenneth Rosfort is emerging as a real prospect, with hands of stone and the ability to end a fight in spectacular fashion at any time. At 13-2, The Dane is riding an impressive win streak that included a knockout of TUF star Jeff Lawson and, most recently, a TKO stoppage of the durable Bellator veteran Greg Loughran at Cage Warriors: Right to Fight this weekend. FIGHT! caught up the Kenneth post-fight, and he revealed that taking the lightweight belt over such a highly-regarded adversary meant that he was on the right track:

“I’m feeling great,” Rosfort enthused. “Like I said in the cage, it’s my biggest victory of my career so far. Cage Warriors is a very old and prestigious event so I’m very happy, and I’m happy that I stopped him before the time.”

The fight was not an easy one, and it was decided by a cut in the championship rounds. Although Loughran’s output was arguably higher, Rosfort believes that the momentum was beginning to swing in his favour.

“I felt that I was starting to win the fight. I caught him hard a few times and I was getting him in the side with my left kick. Most of his punches were not really hurting me. Maybe he punched a little more but when I punched I hurt him a lot and I think I rocked him a couple of times.”

The back and forth battle was indicative of the relative styles brought to the fore by the strikers. Loughran’s reach meant that he was able to land from the outside with a piercing jab but, as many have found to their detriment, one right hand from Rosfort can spell disaster. Playing on this innate ability, there were times when Loughran’s chin kept him in it, even when the big ones landed. Able to recover, Kenneth noted that it was all a part of the plan.

“That was my plan actually [to not go in for the kill] because I felt I had control of the fight and I wouldn’t rush in and follow him down because I’ve seen him before and he has a strong guillotine and things like that so I think I wanted to play it a little bit safe.

“I thought I’ll knock him out sooner or later so I didn’t want to rush anything,” he noted, half joking but fully aware of his capabilities. “When I look back at it, I think maybe I should have gone in for the kill a couple of times and been more aggressive but it worked out in the end.”

The end result was a hard right hand that split open Loughran’s upper lip in such a fashion that referee Marc Goddard deemed the EFR man unable to continue. After three and a half hard fought rounds in which the action remained standing, it seemed that Rosfort had finally found an opponent willing to trade blows, something of a rarity in his experience:

“I was expecting that though, as I’ve seen his fights and I knew he liked to stand up so it suited me fine,” he offered with an air of respect to his valiant foe. “Mostly when I’m fighting I’m afraid to be taken down because most of my opponents want to go to the ground with me but I knew Greg would stand with me so it was nice to be able to punch without being afraid of being taken down all the time.”

It showed in the fluid nature of the stand-up exchanges which earned both men kudos, both in victory and defeat. After this momentous win, where does the Dane go from here?

“I’d like to come back and defend my title. I know Cage Warriors put on great matches and I would fight Greg again if they thought it was the right thing.”

After such a crowd-pleasing first chapter, maybe the second chapter will be written but, either way, Kenneth Rosfort it going places and he will pits his hands against anyone in the business to get there. 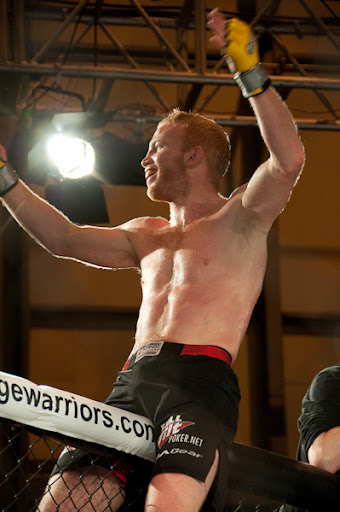