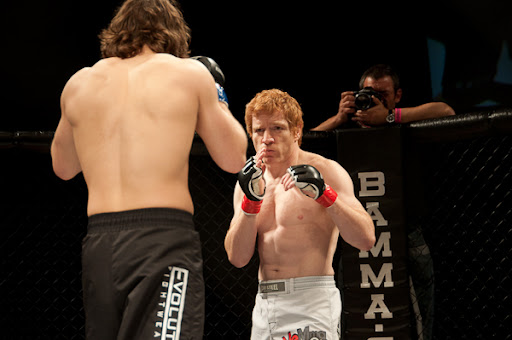 (Reed and Grimshaw square off in their BAMMA encounter. Photo by Dan Holmes)

On May 15th at BAMMA 3, Olympians MMA’s Paul Reed (12-6) had to endure a stoppage loss at the hands of the Ashleigh Grimshaw (7-6-1), who prevailed after 1:04 of the second round. ‘Reedy’ gave FIGHT! his opinion on the encounter.

“I came out, looking to be pretty careful and picking my shots,” stated Paul. “He went for some kicks and I ended up kicking him a couple of times which probably took him by surprise because I don’t normally throw them. Then I started catching him, and I saw his face change. I caught him with a couple of knees and it was like I was having it all my own way. I don’t think he hit me in the first round. I don’t think he managed to land one punch.

“I came back from the first round and had a chat with my corner, and thought it was easy. Then I went out for the second and started letting my hands go, and he suckered me in there. I think I landed a quick combination, then I went back in a straight line, and he went for the counter and he caught me with a big left hook. I think I cut too much weight; I couldn’t sustain the punch, and I can’t really remember. One minute I thought I was doing amazing and I was winning, and then the next the referee was telling me it’s all over and I was looking up in the air, so that sucks.”

In spite of this though, the Bristol resident didn’t feel that Ashleigh had too much strength for him. “He looked very big, but when I grabbed hold of him, he didn’t feel physically strong,” admitted the 38 year-old. “He looked strong, but he didn’t feel strong. I could push him around and outwrestle him. At one point he got double underhooks on me, and I still managed to squirm my way out of it and put him against the cage. I took him down and was ground and pounding him; really trying to let the elbows go and try and catch him, but I don’t think he was very strong physically.

However, ‘Reedy’ readily admits the punch that Grimshaw caught him with was excellent. “There’s no such thing as a lucky punch,” he remarked. “You choose when to throw the punch, and sometimes when someone’s hitting me I do the same thing. Someone backs you up, hits you with a couple of shots, so you cover up, take one or two, then unleash a big left hook. That’s exactly what he did and I think maybe I got a bit overconfident. I should have been a little bit cuter, but the main thing for me is that I cut a bit too much weight and I couldn’t take the punch. If he hit me and I managed to ride it out it would have been a lot different, but it knocked me over and he finished me off.

“I know he was trying to hit me with a big shot because he was throwing with bad intentions; I know because I caught a couple on my hands. He caught me fair and square with the big left hook. Fair play to him; he’s a good sport and he won the fight, but if I could get a rematch with him, I’d jump at the chance. If a show would put it on, I’d give him my pay packet just to entice him back in there. There’s no way he’s a better fighter than me. He got me with a punch, but it was just a sickener.”

According to Reed, cutting an excessive amount of weight the day before hindered his ability to take the fight finishing left hook. He said, “I’m a bit lighter now than I was before the cut. I cut a ridiculous amount on the Friday. I’m quite a big guy for featherweight, but everyone’s quite big really. All the top guys are, but I just cut too much on the last day, and I thought I could get away with it, but I couldn’t.

“I could fight at lightweight. I fought there in my first seven fights, and I’m definitely big enough, but there are some big ones out there. There are some massive lightweights that walk around at about 85kg. Then again, there’s pros and cons to everything as sometimes they cut so much weight that they have the same problem I have at featherweight, where you can take it out of your body a little bit.

“My conditioning felt amazing after the first round though, and I wasn’t even breathing hard. I felt composed and good. The show was really good. I watched all the fights after that and Jeff Lawson was wicked. It was a good show and a really good thing to be part of. The only bad thing was the result, but when you get in there that’s the sort of thing that can happen to you, so you can’t win everything. It does hurt when you get beat like that though. It hurts when you get beat and any defeat’s fucking horrible.”

Retirement is something the Edinburgh born fighter had hinted at before the bout, but he asserts that this isn’t an option just yet. “If I’d have beaten Ash, I could have gone out on a good win, but not just now,” he revealed. “It’s not going to be long, but not just now. I need to get a couple of wins before I quit. I’ve got a fight lined up in Bristol on July 3rd on Tear Up, and that’s a home fight for once. It’s against a guy who’s very inexperienced, but he’s asked to fight me.”

Indeed despite having had eighteen professional MMA bouts, Reed is convinced he has the required goods to compete at a high level. “100-percent I’ve still got it,” enthused Paul. “Apart from getting beaten I’ve performed really, really well and better than I have in a lot of fights, but then again, I’m not taking away the win which sucks. It’s really frustrating though because I’ve shown what I can do but then I’ve messed it up. There’s still a little bit left in me yet, and hopefully I’ll be able to prove it.”