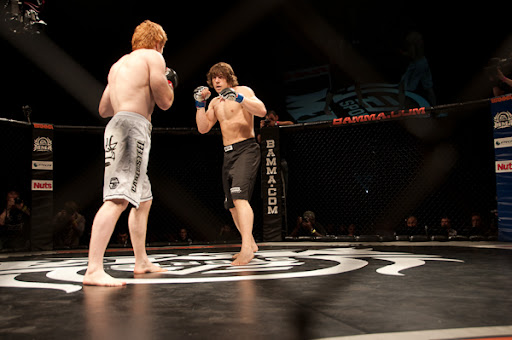 (Grimshaw and Reed square off at BAMMA. Photo by Dan Holmes)

At BAMMA 3 on the 15th of May in Birmingham, England, top Featherweights Ashleigh Grimshaw (9-6-1) and Paul Reed (12-6) collided in a much anticipated domestic battle. After 1:04 of the second round, the fight was stopped with the ‘Thunderball Kid’ emerging victorious via TKO, having floored ‘Reedy’ with a big left hook and following up until being pulled off by the referee. Grimshaw was delighted with the result.

“I was ecstatic,” he proclaimed. “I knew he was a spoiler and he did exactly what I thought he would. He didn’t try to finish the fight. He just tried to take me down and hold me down. I know he can’t take a punch, so I just thought after I hit him once it’d be fight over.

“After I landed the first leg kick, he pretty much didn’t want to stand with me,” Grimshaw flowed. “That’s the feeling I got and what my camp said when I went back. He looked like he was gassing after the first time I put it on him, and I just faked with the right and hit him with the left.

“Paul hasn’t really got much power. We traded and he hasn’t got a dig on him, so I wasn’t worried about getting stopped.” 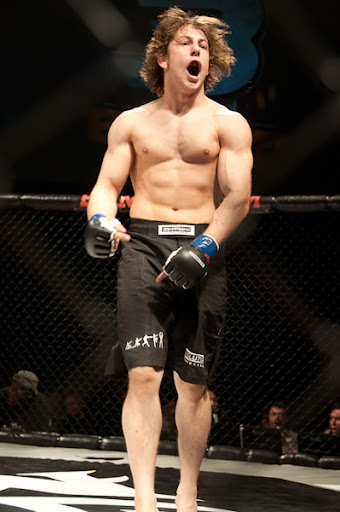 In an interview with Reed here at fightmagazine.com last week, he claimed he was the superior fighter despite the loss, and that Ash wasn’t as good as he was expecting. This irked the victor.

“I found it quite funny, and I don’t agree with anything he said in the slightest,” stated Grimshaw. “I haven’t seen the fight back, but if I didn’t land one punch until that left hook, it’s just proof I didn’t need to land any more punches.

“To be honest, I was a touch insulted. Don’t get me wrong, I’m a good sport, and I kept my mouth shut, haven’t bad mouthed him and haven’t said anything, but to say I’m not strong, he’s a better fighter than me; clearly he isn’t on the stats – Ashleigh Grimshaw, TKO, round two. The paramedics were checking him out, not me.”

Reed insists that the weight cut was problematic for him, and Ash suggests that even before the fight it looked as if this would be the case.

Grimshaw revealed, “He rang me up before the BAMMA show, asking me to make a catchweight and I said ‘no.’ If you look at the pictures from the weigh-in, it was easy to see I was massive though. Cutting weight isn’t a problem for me. My first fight was at Lightweight, but then my last fifteen have all been at Featherweight. I make Feather; it’s not a problem. I know how to do it. Being bigger doesn’t make it harder, you just need to know what you’re doing. You don’t cut a tremendous amount of weight in one day, but Reedy does that because he doesn’t know what he’s doing.

“At Lightweight he’s tough, but he’s not a good Featherweight,” continued Ashleigh. “Frederic Fernandez knocked him out, Emmanuel [Fernandez] dropped him as did Brad [Pickett] I think; he hasn’t got much of a chin so I knew one shot was all it would take.”

Paul has been campaigning hard for a rematch, even offering to give Grimshaw his whole purse to make it happen, but Ash remains uninterested. He questioned, “Rematch what? The first fight lasted six minutes. My reputation is worth more than £1,000. Never in a million years; I was hoping I’d retire his old arse! Now he’s fighting a kid who’s 1-1? What is this, Scooby Doo? He’s trying to use these kids at stepping stones to get back up.”

An experience Grimshaw will never forget is fighting on a BAMMA card, and even in light of recent events with fighters not being paid promptly, he hopes to be able to do it again in the future. “BAMMA was a very, very good show,” he noted. “All the competitors on there were top class. To be honest, the pay thing’s not actually BAMMA’s fault. People are blaming them because they’re the promotion, but it goes deeper than that.

“They wouldn’t want to not pay people. It doesn’t work that way. It was professionally run, and it was like a British UFC. The production was slick, and the guys came down and spent four hours with me just for a tiny clip. Those guys work seriously hard.”

Next up for Ash is an OMMAC Featherweight Title tilt against the unbeaten Dave Hill (8-0). For Grimshaw, this can’t come around fast enough.

“It should be a good fight,” he enthused. “I know he’s a grappler, and he’s going to try to take me down and sub me. I’l be doing the straight opposite and trying to knock him out.

“The earlier I put him away the better and I’m sure he’s thinking the same thing,” continued the 145-pounder. “I’ve got a lot of respect for him though; he’s a very, very nice guy, just like the people in his team, like Marc Goddard’s a top fella as well.”

Unlike his distain for Reed, the ‘Thunderball Kid’ has an extent of admiration for his future foe. “I have a huge amount of respect for Dave Hill. He’s an amazing competitor. I think we’re both quite dynamic in our strengths, so it could end in the first or it could go to a decision. You just don’t know. He’s no clown, he’s definitely been around and done his time with a ton of amateur fights and being an 8-0 pro, but I don’t want to brag and I hope I’m not, but I think I’m the biggest name he’s fought.”

In spite of this, the veteran is still confident he can be the first man to put a dent in Hill’s record. “You don’t take the fight thinking you’re going to lose,” he stated. “That would be ridiculous. Hopefully, he’ll end up knocked out just like Paul.

“I try to make statements in every fight. That’s the idea to get recognised. My record isn’t great; I’m 9-6-1, but all of my nine wins come from stoppages. There’s no decisions; I stop everybody. I don’t get paid for overtime.”

Before the BAMMA 3 bout, Grimshaw told of his desire to compete in Japan. This remains as one of his priorities. The Londoner admitted, “That is my main goal and ambition. At the end of the year, I’d like to have racked up some nice wins. Knocking out Paul Reed was just a stepping stone for me to get the other shots.”

This Is HardCore: Fight Homework