After nearly two years off the scene since the last instalment of ‘Enter The Rough House’ in 2008, Cage Warriors returned with a fight card that utilised both top domestic talent as well as some of the most promising fighters from Europe. With connotations stretching much further than the Midlands, there was a lot of stake for a variety of the burgeoning athletes that were to showcase their talents at Birmingham’s NEC. Interest from larger organisations, and even pending contracts, meant that the need to impress was invaluable. Stepping up to the plate and laying it all on the line, many delivered and it will be interesting to see how the newly crowned champions will react and what this new accolade will do for their careers. 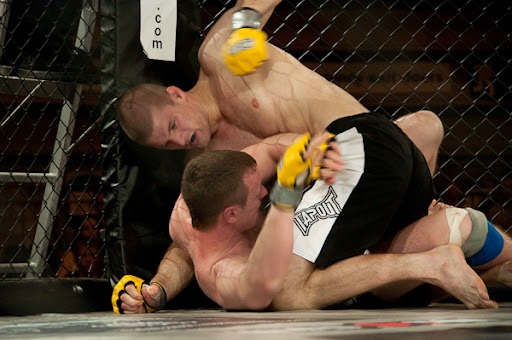 At the top of the bill, two undefeated welterweights put their perfect 8-0 records on the line in a Scotland vs. Germany battle. There were fierce pockets of support for the Dinky Ninja John Quinn whilst visitor Pascal Krauss was looking to take the victory and Cage Warriors belt back to the mainland. Neither man had been to the scorecards in their young but successful careers. With a slew of submission victories between them, it was expected to be a hard-fought battle with the proven finishing rates coming in to play.

Both men had some success in the stand-up portion of the bout in the first round, with Quinn landing a hard right counter early on. As Krauss grew in confidence, his combinations did the same and a successful flurry backed Quinn up against the cage. Ending his combos with stinging leg kicks, he was beginning to get the upper hand and the Scot sensed it, opting to go for the takedown. He briefly put “Panzer” on his back but the German scrambled to his feet well, returning with a takedown of his own. From the top position, Krauss used effective ground and pound to take the round, although Quinn did manage a sweep just as the round ended.

In the second stanza, aside from an early knee from the clinch, Quinn failed to mount much of an offense as the German really started to control the fight and dictate the action. Hitting the takedown, Krauss began a vicious ground and pound assault that may have finished somebody without Quinn’s tenacity and spirit. Whilst looking for an anaconda choke, Krauss continued to pound. When he rolled for the submission, Quinn’s durability paid off as he escaped and managed to take top position. It wasn’t to last, however, as Krauss swept to mount position. His punches forced Quinn to give up his back and this signalled the beginning of the end. Much to the disappointment of Quinn’s fans, he was forced to tap just thirteen seconds from the end of the round.

Although there was some success from both men at various times, it was clear the Krauss was the indomitable combatant in the cage that night. He proved that he was worthy of the top class Europeans that no doubt now lay before him and it will be interesting to see where the promising welterweight goes from here. 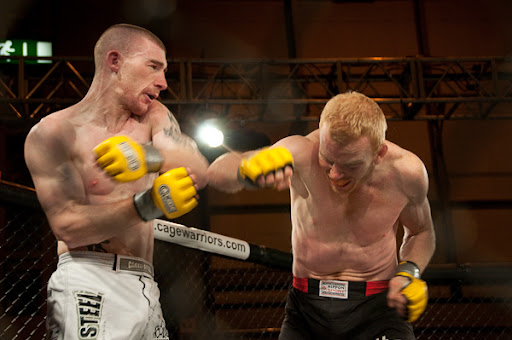 Kenneth Rosfort vs. Greg Loughran was highly tipped to be fight on the night with both men extremely tough with a penchant for throwing hands. It played out in the fashion many expected as the fighters hit the mat for only the briefest of moments in the third with Loughran stuffing a Rosfort takedown minutes after bouncing back up from a heavy right hand.

Loughran utilised his physical attributes by jabbing well and backing Rosfort up with straight punches. The experienced EFR man controlled the cage for the most part of the bout and pressed forward with intent. Although Loughran had the upper hand in volume, Rosfort did always look dangerous. Many of his past adversaries can attest to the heavy hands he possesses and the Dane was certainly looking to add another highlight reel KO to that list. Loughran’s chin and conditioning kept him in the fight where others have faltered

With the overhand right as his weapon of choice, Rosfort was often beaten to the punch by his longer opponent but he did cause considerable damage when he was able to work his way in. The third round saw Rosfort counter a Loughran leg kick with a hard right. This dropped the Irishman but, in Clay Guida-esque fashion, he popped straight back up to his feet.

With both men trading and working well, they entered the championship rounds. With Loughran busier earlier on but Rosfort appearing stonger as the minutes ticked by, it was all set up for an exciting home stretch. “The Hitman” got bloodied up as the fourth progressed and a textbook Rosfort right hand found a home in the shape of Loughran’s mouth. The solid shot opened up a gash that immediately spewed blood to the canvas and referee Marc Goddard called in the doctor to inspect the cut, but ended the bout before the ringside physician could even make it inside, such was the nature of the laceration. Although it cut short a great back and forth encounter, Rosfort was becoming more confident as the rounds went on. Speaking in the cage after capturing the Cage Warriors lightweight belt, he admitted being open to a rematch. If it panned out anything like the first one, it would be a treat for the fans. 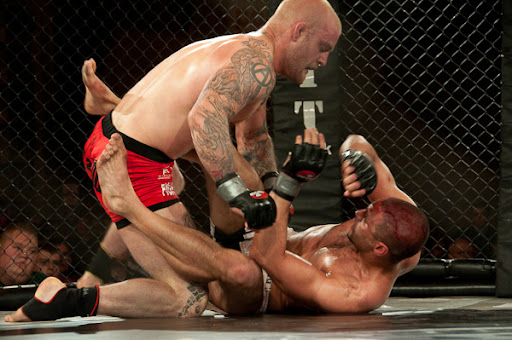 (The story of the fight as Irving works from top position. Photo by Dan Holmes)

Fighting for the 10th Legion welterweight crown following the combining of the two shows, Pete Irving and Nordin Asrih battled to a decision. Irving showed great composure on the feet, landing kicks to the legs and body. However, it was from top position where the North East man really made an impact. His wrestling looked sharp and Asrih – a formidable opponent – just couldn’t avoid the takedowns.

The story of the fight was Irving’s active passing game and brutal elbows. Opening up a gash on Asrih’s head in the second, Irving continued to be aggressive with his positional dominance throughout and the ground and pound onslaught coupled with Asrih’s failure to mount any real successful offense of his own meant that the victor was clear cut as soon as the final bell sounded. Irving took the title and got back to winning ways, using his always-dynamic and entertaining style. 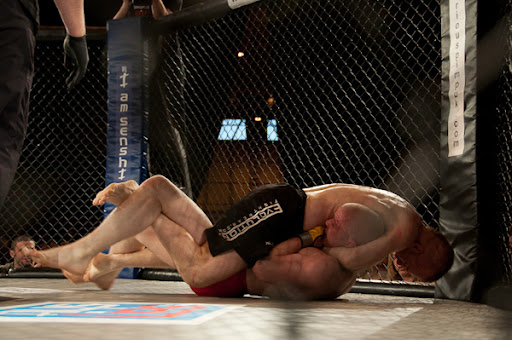 Ireland met Wales at 155lbs when the 4-1 Ali McClean took on his toughest test to date in the shape of Daniel “Denzil” Thomas (18-5). Training at Team Kaobon for this one, the limited stand-up we saw from McClean looked sharper and his jab was accurate early on. Thomas used his guile to get the takedown from the clinch and, although McClean was able to work back to his feet briefly, they ended back on the ground as McClean looked to secure a guillotine choke. “Denzil” escaped the submission attempt and in the ensuing scramble as McClean tried to work to his feet, Thomas returned the favour and locked on a guillotine of his own. Looking at the Welshman’s record for evidence, you can see that the choke is a high percentage favourite for him and it proved to be successful again this time as he elicited the tap after taking mount position. 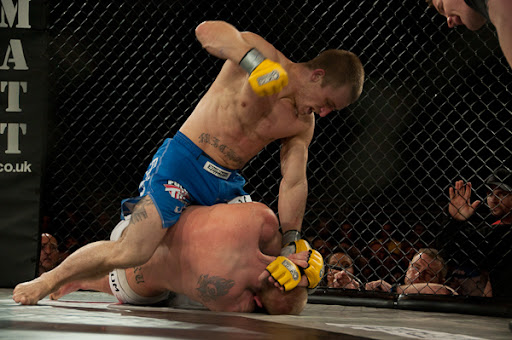 (Sinclair punches his way to victory. Photo by Dan Holmes)

Often struggling to get matched and with weight class fluctuations, Mick Sinclair managed to find an opponent at the final hour in the shape of Josh Dennis. The bout was to be contested at 80kg despite Sinclair having competed at featherweight before. Although Dennis was 0-4, he wasn’t here to lie down for the Kaobon and Predators man. Dennis came out swinging with a rugged intent but it wasn’t long before the class and experience of Sinclair shone through and overwhelmed the raw aggression. Taking Dennis off his feet with a leg kick, Sinclair then clinched with his foe and proceeded to carry him from one end of the cage to the other in front of his cornermen, much to the delight of the fans. With mount position secured, it was straight forward from there as heavy ground and pound rained down and the referee intervened to stop any further unnecessary punishment. 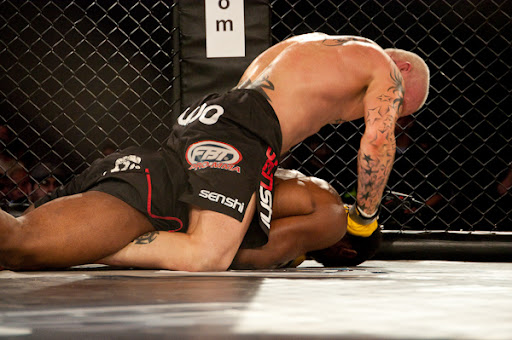 (Wallhead controls from the back. Photo by Dan Holmes)

Bellator signee “Judo” Jimmy Wallhead has had a well-documented series of bad luck, but he put that behind him in the cage when he made short work of the durable journeyman Shaun Lomas. Lomas, an experienced Muay Thai practitioner, was taken out of his element by the Rough House man and ate some short elbows, knees and punches after being put on his back. Turning to avoid the onslaught, Wallhead sunk in the fight ending choke halfway through the first round. 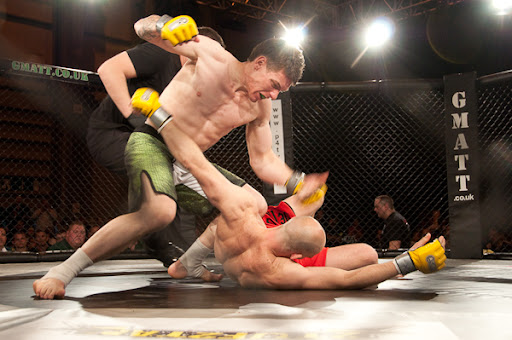 (Chapman follows up for the finish. Photo by Dan Holmes)

In other action, Louis Chapman secured the KO of the night after a rocket left hook put Jay Gilbey down and the subsequent ground and pound separated him from his senses. Sarah Moras’ superior ground acumen saw her dominate after a frustrating first round that was fought mainly in the clinch. She found top position on Helena Martin and pounded her way to a TKO victory. James Bateman and Ronan McKay engaged in a tough back and forth battle that could arguably have been scored for either man, with Bateman getting the nod and Tom Breese submitted Ramon Silva in the opener.

A fine return to action saw Cage Warriors put themselves back on the European MMA map and the team will be looking fulfil their potential with all of the title holders stating their desire to return and put their belts back on the line in front of the British crowd.

Jamaine Facey: Hands Up And Gunning For Titles